Life as a Bassist, Nate West: "Traveling and experiencing the world with my instrument is amazing." 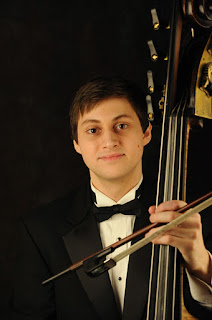 When we interviewed Nate, he was in London and wrapping up his Europe tour with the The Philadelphia Orchestra​. Although in the middle of a packed tour-schedule, he still replied with such speed and thoroughness, that we thought says a lot about Nate as a person. He shared many thing about his life as a chamber musician, but especially on his thoughts about tours and making music with an ensemble around the world.

Since you were just on an exciting tour, what do you like about traveling as a musician?

I've been incredibly fortunate to be able to travel for performances and the like all around the world in recent years; in and around Europe, Asia, and North and South America. Knowing that there's no way I would have been to any of those places if it weren't for opportunities granted to me in my musical career, I do my best to experience every city/country as much as I can, non-musically. A fair bit of that is through food (especially in Asia!) but I tried to go on a couple hikes in the Alps every year when I was a member of the Verbier Festival Orchestra in Switzerland. While in Chile in January, I made a 3-hour trip with friends to go see a penguin colony, which is certainly something you can't do in most places!

What do you look forward to in a concert?


I think what I enjoy most about giving concerts is the exhilaration and spontaneity that comes from having only one shot at making the music in any given moment, no matter how much rehearsal time was spent on it. In fact, the more unsure I am of what's going to happen next, the more fun the concert usually is for me. I will say, though, that Jack's got the right idea if you include the beers with people after the concert as part of the experience...


Where do you practice? Is there a special type of environment you prefer?

I usually practice in my room, or in practice rooms when I was still in school, so I can't say I have much of a good answer to this one. One of the most fascinating aspects of traveling a lot as a musician, especially orchestrally, is getting to experience the myriad of different concert halls every city has to offer. Playing at the Musikverein in Vienna and Concertgebouw in Amsterdam were once in a lifetime experiences to have on the tour that I just finished, and it always amazes me how different things are in each place. The orchestra sounds different, playing together as an ensemble changes radically, and even one's own instrument feels different in every hall. There's also such a palpable, almost tangible feeling of the history of great halls when you play in them, knowing that they've been home to legendary orchestras for half a century (or much longer!). Or for one example, the concert I performed in Paris was in Théâtre des Champs-Élysées, which was where the famous riot at the premiere of Rite of Spring occurred in 1913. An amazing place to be!

Are there other musical activities you do other than concert performance?

I play in a quintet in Philadelphia quite a bit that does some experimentation with less traditional classical concert performances - we did a set of shows last September in which we performed 3 new commissions written to be choreographed and danced to by the Pennsylvania Ballet. Working with dancers is, to be sure, a departure from your regular classical-musician rehearsal process.

What do you like about being a bass musician?


I actually used to get really frustrated by being a bassist - there's very little glory to be had in it, truth be known. The older I get though, the more I've come to appreciate the role of the bass in any concert setting. Whether or not the audience notices anything you're doing, the bass is so essential to any and every piece of music, and is so structurally important to making any performance work. If the bass is doing their job well, things are easier for everyone else involved, and experiencing any piece through the lens of the bass offers, to me, a more naturally complete picture of the piece as a whole.
Posted by Unknown
Email ThisBlogThis!Share to TwitterShare to FacebookShare to Pinterest